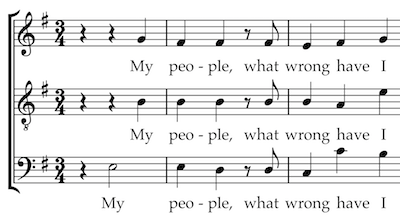 Written for three-singer choirs in 2021, and updated with a new SATB version in 2022, this is a simple setting of the modern CW text of the Reproaches.

Written for Rochester Cathedral and performed there annually from 2011 to 2019, this setting has recently been expanded to included chapter 18. In 2021 I put together a virtual performance of it which you can watch here.
Both pieces may be freely downloaded, reproduced and performed.

Listed on this page are several of my compositions, as well as Hymn arrangements and music I've typeset. Anything on this page may be freely downloaded and reproduced for performance. I'd be glad to know of any performances. Some of the compositions here haven't ever been performed (for example Composition Competition entries). If there's anything you would like to perform which is listed but without a PDF, let me know and I'll see if I can get it.

Written for the RSCM Music Sunday Composition Competition.
How beautiful upon the mountains (SATB) (April 1997)

Written for ATB on Choir Tour in Malaysia; expanded to SATB for GCSE.
Hymn Tune: Christ in Glory (December 2008)

Written for Hid within our daily living by Neil Thompson. Never presented, nor performed.
Hymn Tune: Christmas with Christ (December 2009)

Written for Katherine Beddus, on her 19th Birthday. Performed three times at Corpus. It's got a good tune, but the third verse and the ending needs a bit of work: there's a bit too much whole-tone/augmented chord experimentation...
Omnes amici mei (SATB) (February 2019)

Written at a time when it looked like only three singers would be allowed on Good Friday. Also available: a Tablet edition with it fully written out.
Reproaches (SATB) (March 2022)

A setting (in English) of Psalm 129. Part of a set of three, including "Blessed are all that fear the Lord". This setting is loosely based on a Plainsong Psalm tone, with a fair amount of whole-tone harmony. The Sibelius file needs tidying up before a PDF can go up here.
The First Nowell (SATB (with some divisi) + Organ) (September/October 2017)

Written for Rochester Cathedral Choir and performed there annually on Good Friday from 2011 to 2019. This setting uses the traditional plainsong with the usual chorus parts set to new music. Additionally, the part of God and parts of the Evangelist are taken by the choir. Inspiration from the Camidge chant as often used for Psalm 22 (as set for Good Friday). The original version only set chapter 19, but chapter 18 has now been prepended.
The Good Shepherd (SATB) (March 2013)

Winner of the Durham Cathedral Composition Competition.
Thou hast been a strength to the poor (SATB + Sax + Organ) (March 2021)

Written for the St Edmundsbury Singers, this is based on the traditional Easter plainsong.
What does the Lord thy God require (SATB (or 2-part) + Organ) (January 2011)

Written for the Girls' Choir at Rochester Cathedral. Was one of the four introits sung at the start of the Eucharist whilst the Advent Candle was lit. This is for Advent 3.  I reduced the number of parts in 2011.

In bread we bring you lord (SATB and Organ, anthem-style) (September 2008)

Purcell Remember not, Lord, our offences (October 2004)
Schubert Mass in G (no Benedictus or Credo yet) (December 2010)
Stanford Sanctus from Communion in B flat (November 2004)
Tallis Responses (May 2009)

22 hours ago via Twitter for iPhone in reply to NoraRechel7